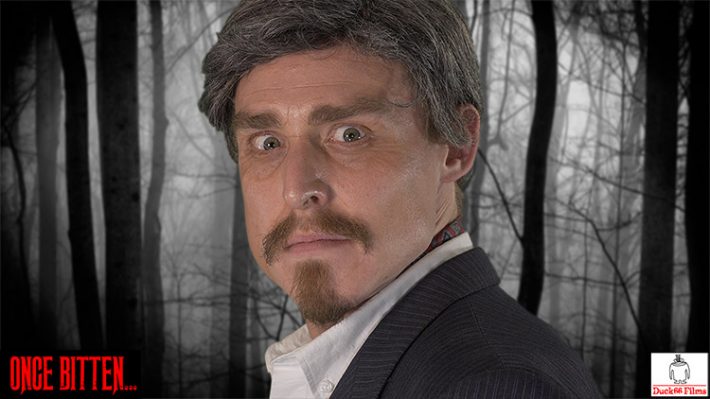 In the fifth part of our series of Q&As with the cast and crew of Once Bitten… it’s time to say hello to the inimitable Sir Dickie Benson! [For legal reasons we need to point out that any views, opinions or historical events expressed are all Sir Dickie’s and not ours!]

I am a born Actor. Literally. To set the scene, it was the 24th of December, 1942 at a quarter to midnight. Jerry’s dropping bombs on Bury when Athenoula Florentina Benson; Head Mistress and Drama teacher at the prestigious St Swithin’s School for Wayward Girls has gathered some of the terrified local gentry into the basement of the school and along with some of the girls was putting on the play to help calm the crowd. Mother had taken the role of Mary. Ever the method actress. The clocks struck midnight as a butterfly bomb obliterated the sports hall above, I exploded into life and was catapulted onto the makeshift stage to a cowering ovation.

John Gielgud. He took me under his wing, employing me as his chief dresser, although he quickly realised I had other uses and I was promoted to chief enforcer. I mostly hung around the docks and knocked out sailors with a sock full of his awards.

An antique nargile pipe I’d received forcefully from Brian Cox (the actor) whilst backpacking through Nepal with him and Malcolm McDowell.

‘The Elegance of the Epicurean Eunuch’, my passion piece with Mckellen containing the first reverse mangina ever to slip past the BBFC .

Not in my vodka.

The liberal drug use and casual nudity on set.

I’m not sure I can answer that question for legal reasons.

Another stint at the Malibu Palisades Rehabilitation Centre and Day Spa.

Thank you to Sir Dickie for sharing his answers with us. Look out for another cast & crew Q&A next week!