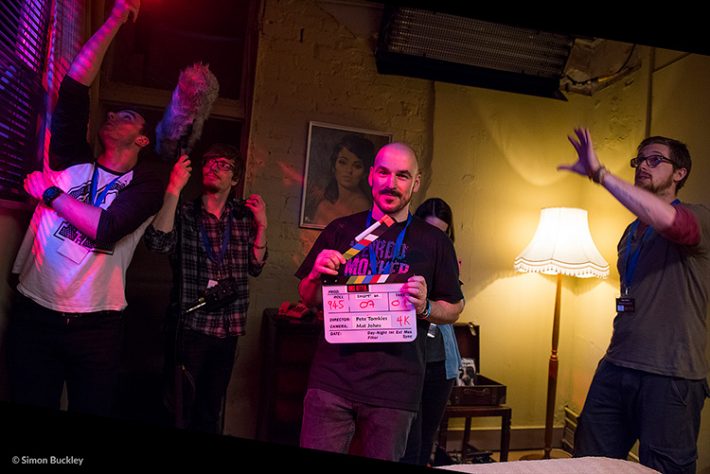 What was the first film you ever made and how old were you?

A two minute James Bond film shot on standard (regular/double) 8mm film. I guess these days it would be called a fan film! I was five or six.

When did you know you wanted to be a film maker?

My dad had an 8mm cine camera to shoot home movies so as soon as I was old enough to be allowed to hold the camera I was making films. I got my first cine camera for my 8th birthday and never looked back.

Peter Weir’s Gallipoli. And more recently Rust And Bone. The first time I saw it I sobbed like my heart was breaking for an hour afterwards.

The whole experience was fabulous because of the people. Working with such talented actors was a dream come true for me, I was in awe as they brought their characters off the pages of the script and into life before my eyes. Once Bitten… cinematographer Mat Johns is a magician with light and did a fabulous job, perfectly interpreting my sketchy storyboards and on-set ramblings to capture the images from my head on camera. It feels wrong to single anyone out though as all of the cast and crew were wonderful from start to finish, dedicated, enthusiastic and hard working. It was a joy and privilege to be on set with such a talented group of people each day.

I want to give a special mention to everyone at A4 Studios as well. We were there for two months while we built the set and everyone welcomed us into their community. It’s a fabulous venture and a real wrench to move out when we wrapped. I still miss being there.

As Pumbaa so expertly said: “You got to put your behind in your past” so I’m saying that absolutely nothing sucked about making Once Bitten…. If you want to know more ask me over a cocktail or three at a film festival one day.

Currently it feels like my entire life revolves  around the last stages of post-production on Once Bitten… as I am busy coordinating with the sound design team and composers while finishing the VFX. However I have been filming live music as part of Courtyard Creations with Thurston Thomson and I also write for Videomaker magazine. And I’m managing the Once Bitten… Film Festival Fee Fundraiser of course (hint, hint, click here!).

Any advice for aspiring film makers?

Make films. I grew up shooting 8mm film so you filmed for three minutes then had to wait two weeks for the film to come back from processing to find out if it was in focus or correctly lit.  Editing meant cutting my irreplaceable footage into pieces and gluing or taping it back together. Oh and for much of my early film making life I didn’t have sync sound. Or any sound.

Nowadays you can shoot HD video on your phone and have access to the same software that Hollywood uses to edit. Davinci Resolve gives you industry standard editing, grading and VFX – for free! Don’t obsess over the camera you wish you could use. Shoot with what you have, learn your film making craft and have fun. Making films is awesome.

Thank you to Pete for sharing his answers with us. Look out for another revealing cast & crew Q&A next week!