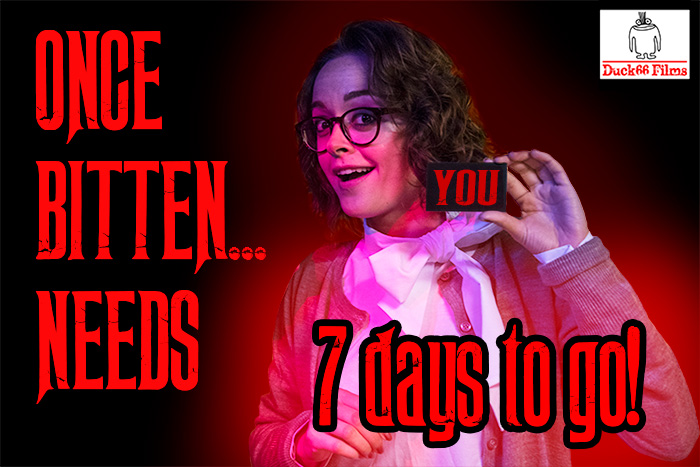 We are now just 7 days away from the start of the Once Bitten… crowd funding campaign and we are excited to reveal another of the rewards that will be available from 1st May.

We won’t be taking a penny of any money raised for our time. All of the proceeds from the crowd funder will go towards festival submission fees and associated costs such as the preparation and posting of screening copies of the film on Blu Ray or DCP. We will also produce a limited run of posters to accompany Once Bitten… on its festival world tour.

Once Bitten… tells the story of Martha Swales. One stormy night Martha needs the toilet fixed in her hotel bathroom but there’s one problem: her plumber may just be a vampire! Martha Swales is played by the fabulous Lauren Ashley Carter (star of Imitation Girl, Jug Face, Darling & POD). Once Bitten… also stars the awesome Garth Maunders as Dredvoka (is he a plumber or is a vampire?) and the inimitable Sir Dickie Benson as himself.

We have already announced that there will be a number of unique items signed by Lauren Ashley Carter available to our supporters but today we can reveal the very exciting opportunity to have your name onscreen in the credits of Once Bitten…!

We will be submitting Once Bitten… to as many film festivals as possible but we have a priority list of some of the most prestigious horror film festivals around the world. So we will be offering the chance for you to become the Key Festival Sponsor for one of those festivals and be named in the credits when the film is screened at that festival as well as in all of the surrounding social media publicity. And yes, you will be the Key Festival Sponsor for that festival as there will only be one sponsor for each of our priority target festivals. You will truly be a part of Team Once Bitten…!

Please sign up to receive an email whenever we post a new update or follow us on social media and look out for the full launch of the crowd funding campaign this time next week!

Like most independent films Once Bitten… was shot on a micro-budget and every penny spent is up there on the screen. We know that times are hard for many people and that there are lots of great projects asking for and deserving of your support. But even just sharing our messages on social media, linking to our website and spreading the word about Once Bitten… wherever and whenever you can is a huge help and we are truly grateful for all of your support, thank you!