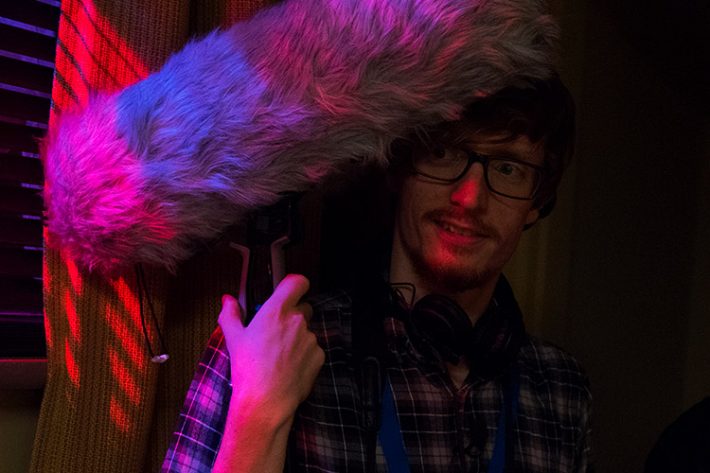 Welcome to the third in our series of Q&As to let you get to know the cast and crew of Once Bitten… a little better. This week meet the man behind everything sound on Once Bitten… Thurston Thomson.

What was the first music composition you ever wrote and how old were you?

I’ve been writing music as long as I can remember. I had a fictitious band called The Grapes in primary school and insisted on ‘performing’ my music to all of my relatives whenever possible.

I find it hard to pinpoint a role model.. It’s an unusual concept to base your life around someone else’s. However, I am inspired by many people, too many to list. Two that stand out are Bruce Springsteen,  both for his outstanding musical career &  prolonged pursuit of social justice, and Harper Lee, again for her stance on social justice and equality.

When did you know you wanted to be a sound engineer / composer?

I gave up on my football career around the age of 10 after failing to get into the school team & accepting that I would never take Scotland to the World Cup. From there music was the only career for me.

Abernethy/shortbread. Playing up the Scottish stereotype.

Coffee, although my Chinese friend is trying to influence that.

It’s hard to pinpoint one thing that I loved, everything was so great. The location and set were both brilliant, as well as the entire cast & crew. However, the sheer amount of food supplied perhaps tops off what was such a great experience.

The worst thing was that it only took 3 days to film! I would have loved to hang out with everyone for much longer.

I’m currently sat in a bar in LA during a break from filming a documentary about a pilot trying to find love around the world using Tinder. Go figure.

Do what you love as long as you can, the career will fall in place.

Thank you to Thurston for sharing his answers with us. Look out for another revealing cast & crew Q&A next week!