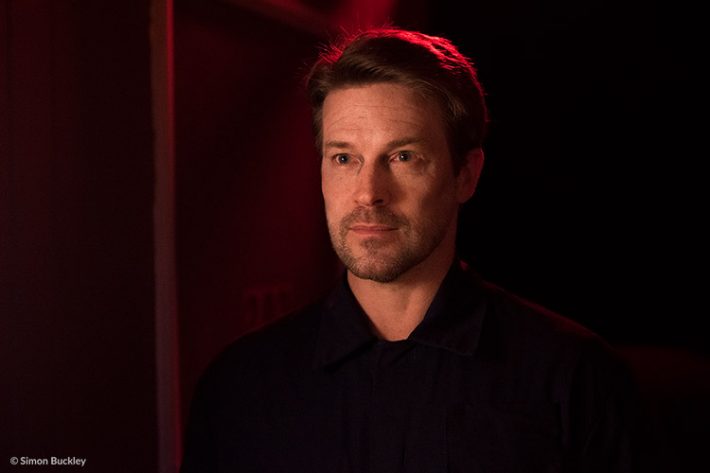 Welcome to the second in our series of Q&As to help you get to know the cast and crew of Once Bitten… a little better. We still aren’t sure if he is a plumber or a vampire but say hello to our Dredvoka, Mr Garth Maunders.

My favourite colour has changed throughout my life. Maybe it changes as I get more mature or experience new things, or perhaps it depends on how content or on edge I am at any given moment. Who knows. I’ve had stages of liking blue, purple, gunmetal grey, blood red, now I’m currently in an orangey/rust phase. My first car was a VW Beetle which was sun yellow orange/rust coloured…. that’s why I like it!

My first acting role was a school production in the Christmas nativity when I was about 6. I played a sheep and my one and only line was “I am a lamb, my name is Shaune, I came to see the baby born”. I was so nervous! For some reason the memory of that experience stayed with me and I guess thats where this whole adventure started for me.

In life it has been and will always be my mum. Supporting me and giving me great advice and letting me talk her ear off whenever I need to. In acting I am inspired by so many like Tom Hardy, Gary Oldman, Leo and Brad Pitt who are all great chameleon actors. For some reason when I auditioned at the Drama Centre and was asked this question I responded with Sir John Mills. I loved films like Goodbye Mr Chips and Hobson’s Choice when I was growing up. My son would kill me if I didn’t give Peter Sellers a mention though. He’s dutifully been force fed all the Pink Panther movies and we love them..

I only figured this out in my late 20’s. I enjoyed my life fully throughout my teens and 20’s and actually only did a two week drama course for fun when I was 29 whilst living and working in London. The course was at the City Lit and after the course, Rodney Archer, who ran it took me aside and recommended I apply for some of the bigger drama schools. He gave me a list of 6 names which included Rada, Webber Douglas, Lamda, Alra, Drama Centre and I applied and was very fortunate to get accepted by a few of them. I picked the Drama Centre as I’d heard all the horror stories about how tough it was and I knew I needed challenging as I was totally new to it all and starting way behind my peers. The fact that it was considered ‘the’ method school really appealed to me.

What one essential thing do you always have with you when on set?

Anything with chocolate in it… its my achilles heel..

Marley and Me (although this and the previous answer regularly get switched around).

The full experience was awesome. It was such a brilliant cast and crew and Lauren and I became great friends. Pete made sure everything ran like clockwork which was remarkable as there had been a major problem on the day of shooting.  (PETE…. DO YOU WANT THAT MENTIONED?).

[Edit: Yes my therapist said I need to talk about it – Pete Tomkies]

2017 was brilliant thanks to my agent Nicky at Regan Management and it’s looking like a great 2018 so far. I’m about to shoot a music video which will definitely raise a few eyebrows! Then I have another short film to work on. After that there are a couple of features which will be great to do towards the end of the year. I’m also working on a web series with a couple of actor/writer friends of mine which I’m very excited about. For me personally, I enjoy doing a wide range of roles. Every role is different and challenging and I love that about acting.

Any advice for aspiring actors?

The advice I’d give is to work hard and stay focussed and grounded. Create your own network and keep challenging yourself in everything you do. Learn as much as you can and if you have an idea for a project just write it down and film it yourself. You never know who will see it and want to work with you. And most importantly… have fun!

Thank you to Garth for sharing his answers with us. Look out for more Q&As with our cast and crew over the coming weeks!