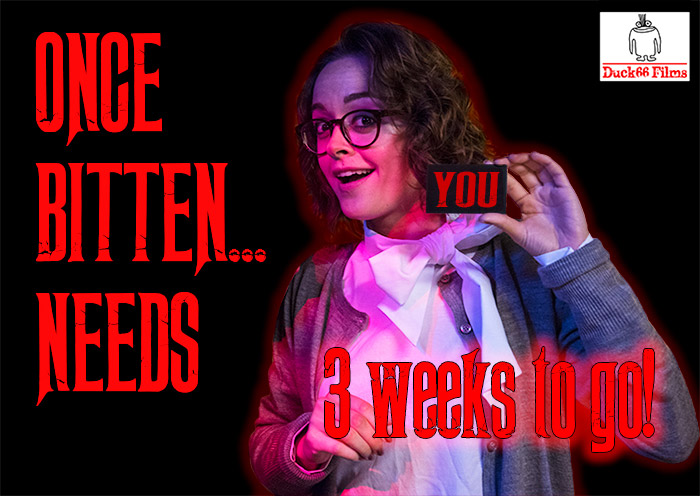 There are only 3 weeks to go till the start of the Once Bitten… crowd funding campaign so we thought it was time to reveal the first reward that will be available to supporters.

We aren’t asking for help to make Once Bitten…. Our film is deep into post-production and on course to be finished for June.  Everything is budgeted and paid for but we want to get Once Bitten… into as many film festivals as possible so that we can bring our film to a screen near you. So that’s where we are asking for you to join Team Once Bitten… and help us raise funds for festival submission fees. In addition to our eternal thanks for your support we have some pretty special perks to offer you as well!

Once Bitten… tells the story of Martha Swales. One stormy night Martha needs the toilet fixed in her hotel bathroom but there’s one problem: her plumber may just be a vampire! Martha Swales is played by the fabulous Lauren Ashley Carter and we have a number of unique items signed by Lauren to make available to our supporters.

So without further ado the first reward we are revealing is…. Martha Swales’ business cards as featured in Once Bitten… individually hand signed by Lauren Ashley Carter!

Unfortunately the business cards which featured on screen met with a small accident during the shooting of a particularly gory scene (see below) but we had an extremely limited number of cards which survived unscathed and one of these could be yours! Did we mention the cards are SIGNED BY LAUREN ASHLEY CARTER!? 🙂

Like most independent films Once Bitten… was shot on a micro-budget and every penny spent is up there on the screen. We know that times are hard for many people and that there lots of great projects asking for and deserving of your support. But even just sharing our messages on social media, linking to our website and spreading the word about Once Bitten… wherever and whenever you can is a huge help and we are truly grateful for all of your support, thank you!