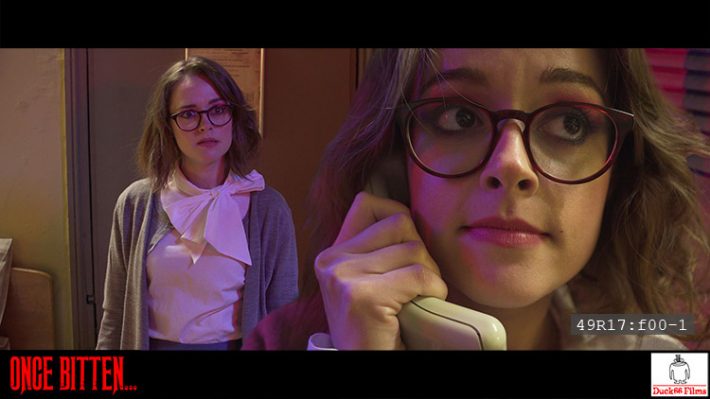 Natasha Kermani’s fabulous debut feature film Imitation Girl has rightly been receiving rave reviews since its award-winning festival run in 2017 and subsequent release across all major VOD channels last month. However one aspect of Imitation Girl which found particular favour with audiences is that both lead roles of Julianna and the eponymous alien are played by none other than our Martha Swales – Lauren Ashley Carter.

Inspired by this concept Duck66 Films have today announced that they have decided to go one better and have not just two but all three characters in Once Bitten… played by Lauren Ashley Carter. Using cutting edge digital SFX technology the company are working through the previously shot footage to seamlessly replace both Garth Maunders (who played Dredvoka at the time of filming) and Sir Dickie Benson (who had appeared as himself) with shots of Lauren.

Director Pete Tomkies said: “It’s exciting to take Once Bitten… in a new direction by replacing the entire cast with Lauren Ashley Carter. George Lucas used technology to reimagine Star Wars and we’re doing the same with Once Bitten… though we won’t be destroying the magic of anyone’s childhood as no one saw the original cut of our film”.

“It’s a bit like the film Heathers where the lead characters were all called Heather except that in Once Bitten… the characters have different names and the actors are all called Lauren. So in that way it’s nothing like Heathers.”

Duck66 Films have released some early timecoded frames from the reworked sequences along with the original footage for comparison and will be making more annoucements on this breaking story soon.