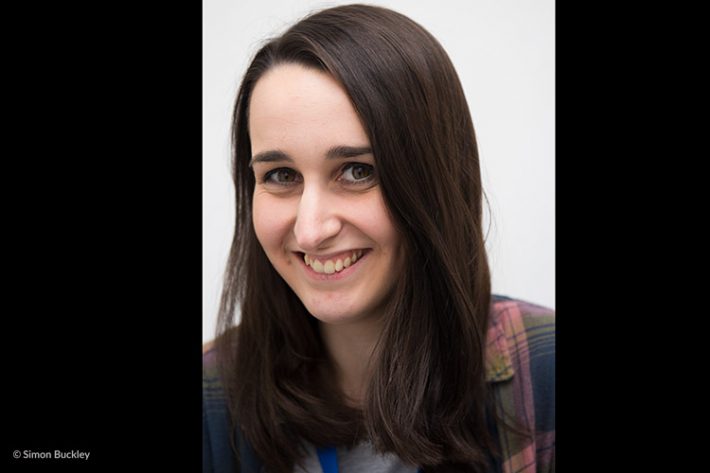 In the latest part of our series of Q&As with the cast and crew of Once Bitten… meet our producer Lauren Prendergast.

Pink, but yellow is something of a power colour for me at the moment.

What was the first film you ever made and how old were you?

I made my first film in my end of year project in my first year of university, so I would have been around eighteen or so. It was called Mayfly and was about a couple that fell in love over the course of one day, since that’s how long the lifespan of a Mayfly is. I’m fairly confident I have the only copy left of it, and will continue to hide it from the world because it was not my best work!

In terms of film, it varies. So many talented people do such great work I always try to keep up with them in terms of their next project, even if it’s outside of their usual field, whether they’re actors or singers, writers or production staff. I tend to have more than one favourite at any given time.  It’s easy to be inspired by those around you when you’re working with people you admire and get to see what they do. For life in general, my Mum is kind of my hero in most things.

When did you know you wanted to be a film maker?

Funnily enough it was after watching Doctor Who Confidential, it was a side program by BBC Three that aired mostly during the Tenth Doctor’s era that showed how they made each episode. I have no idea how popular it was at the time, but getting to see how things were made and prepared for just looked so exciting to be a part of and I wanted to be a part of it too. I’ve always loved stories and films too, so it seemed like a good fit to navigate my career into that direction.

My clapper board, it’s the last thing anyone thinks to bring and it always gets used. Plus it being a Christmas gift of a few years, it’s become something of a lucky charm I bring with me on every set I work on.

You can’t go wrong with a good custard cream, but oreos and cookies are up there also.

Hard to choose just one… I always enjoy watching The Wizard of Oz when I need a pick me up.

Moulin Rouge, without fail. You can also add The Notebook and Spike Jonze’s ‘Her’ to the list.

Neither. Hot chocolate all the way.

Getting to work with old friends again after being on such a long break from the business was definitely a highlight and just getting to work on a project again, along with Pete giving me the freedom to help with almost every angle in the production through my role. I also got the chance to meet some new people who I hope to work with again in the future, which is always a bonus.

We had a couple of setbacks and it’s not nice to see your fellow colleagues in a tight spot, but everyone on the team was super talented and great to work with, so I think we did okay overall.

This year I’ve been helping out our sound engineer Thurston with his Courtyard Creations project for the most part and seeking additional work in other places. I’m currently in talks with an old friend for some future projects, but as we say in show business, nothing is certain until you’ve signed for it!

Any advice for aspiring film makers?

I might have to be in a more official position in the industry before I start giving advice, but the advice I was always given was to just keep going, keep knocking on doors and always keep an eye out for your next project.

Thank you to Lauren for sharing her answers with us. Look out for another revealing cast & crew Q&A next week!